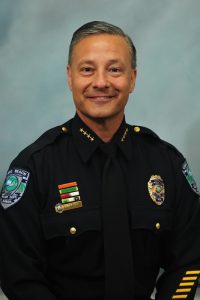 Chief Currey has a Bachelors Degree in Criminal Justice from Stockton University in New Jersey, and a Masters Degree in Public Administration from Florida Atlantic University.  He is also a graduate of the Southern Police Institute Administrative Officers Course in Louisville, Kentucky.

Chief Currey has been on the Florida Police Chief’s Board of Directors since 2014, and a Commissioner for Florida Law Enforcement Accreditation since 2018.

He is a member of the International Association of Chiefs of Police, Florida Police Chiefs Association, FBI Law Enforcement Executive Development Association, and Pi Alpha Alpha, which is the National Honor Society for Public Affairs and Administration.

He is married to Melanie and has three children, Kennedy, Karley and Kyle.