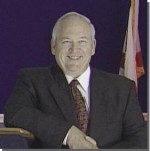 The Florida Police Chiefs Association established the Police Officer of the Year Award in 1998 to recognize police officers who have demonstrated exceptional achievement and shown a genuine commitment to their profession, their agency and the public they serve.

With the passing of Director Lee McGehee, law enforcement lost a visionary who made a significant difference not only as a police practitioner but an educator who had a passion and talent for developing and preparing future police leaders.

A native Floridian, Lee, was born and educated in Ocala, Florida. He began his career in law enforcement, which spanned nearly 43 years, as a high school student working part time with the Marion County Sheriff’s Office. At the time of his death, Lee McGehee was the Director of the Florida Criminal Justice Executive Institute. He accepted the position within the Florida Department of Law Enforcement in 1995, after retiring as Chief of Police for the City of Ocala having served in that position for 21 years. Prior to his tenure as Chief of Police, he served as Director of Administration for the St. Petersburg Police Department and Director of Planning for the Pinellas County Sheriff’s Office. His law enforcement career also includes service as an Ocala police officer from 1965-1967.

A Life Member of the Florida Police Chiefs Association, Director McGehee served as President from 1989-1990 and as the Association’s Parliamentarian. Lee was also active in his community and his church. He served on the Board of Directors for the Ocala-Marion County Chamber of Commerce, Historical Ocala Preservation Society, Ocala United Way, Boy’s Club of Ocala and the Marion County Association for Retarded Citizens. He was also involved as a member of the First Baptist Church of Ocala, taught Sunday school, held the position of Deacon, Training Director, and served on the Personnel and Budget Commission. He was a former Chairman of the State Board of Missions, Commissioner of Christian Life Commission, and Vice President of the Florida Baptist Convention.