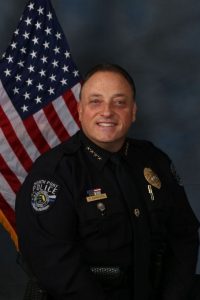 Todd Garrison was officially sworn in as the 20th Chief of Police for the City of North Port Police Department on Wednesday, July 18, 2018. Chief Garrison is a third-generation law enforcement officer who began his career in June 1992 as a Police Officer for the Town of Kenneth City, Florida.

He later joined the Lee County (FL) Sheriff’s Office in March 1994, as Deputy Sheriff. While at the sheriff’s office, Garrison was assigned to the Patrol Division, Criminal Investigations Division, Civil Division, and the Special Operations Division. Garrison rose through the ranks in various positions and components and retired in July of 2018 as a Major. Among his many accomplishments, Chief Garrison has earned an Associate’s Degree in Criminal Justice from Edison State College; a Bachelor’s Degree of Science in Business Management from Hodges University; and is a graduate of the Executive Academy of Government Leadership and Ethics from Florida Gulf Coast University.  He also is a graduate of the prestigious FBI National Academy Session 252.