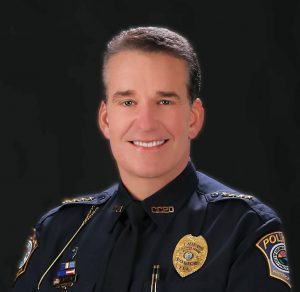 Chief Albert A. (Butch) Arenal served as a member of the Punta Gorda, Florida Police Department from 1986 to 2015, the last 8 years of which he served as Chief of Police. In his 28 year career with the department, he supervised all facets of the agency, to include service as the agency’s Accreditation Manager, coordinating the department’s effort to achieve its first state law enforcement accreditation award in 1998. During his service as Chief of Police, the agency achieved Florida Excelsior accredited status, the highest level of accreditation excellence in the State of Florida. The department was also selected as the 2013 Pinnacle Business of the Year by the more than 1,000 members of the City of Punta Gorda Chamber of Commerce. Retiring from the City of Punta Gorda in September 2015, Chief Arenal was selected as Chief of Police for the Coconut Creek Police Department in October of 2015.

Chief Arenal holds an Associate in Arts degree from Edison State College and a Bachelor of Science degree in Management from Hodges University where he was graduated with honors and was designated by faculty as the Management Student of the Year. He is also a 1998 graduate of the 193rd Session of the FBI National Academy. Chief Arenal has served as Chair of the Criminal Justice Standards and Training Region 10 Training Council, and he currently serves as Chair of the Florida Criminal Justice Executive Institute (FCJEI) Policy Board. He served three consecutive terms as President of the Southwest Florida Police Chiefs Association (2010-2012), where he was voted the 2013 Outstanding Law Enforcement Chief Executive of the Year by the Association.

Chief Arenal is an ardent supporter of law enforcement accreditation and he served as a Commissioner for the Commission for Florida Law Enforcement Accreditation, Inc. (CFA) for three consecutive two year terms from 2009 to 2014. He was elected as Commission Vice-Chair in 2010 and Commission Chair in 2011. He also served as an assessor, team leader, and instructor for the Commission for more than 10 years. Chief Arenal was the 2005 recipient of the Commission’s prestigious Sheriff Neil J. Perry Service Award recognizing top performance in the field of Florida law enforcement accreditation and commitment to the law enforcement profession. Additionally, he served as Second Vice President (2001-2003) and President (2003-2005) for the Florida Police Accreditation Coalition, Inc.; an organization of more than 200 Florida criminal justice agencies united in pursuit and maintenance of accredited status.

Chief Arenal has been an active member of the Florida Police Chiefs Association (FPCA) since 2006. He served as President of the Florida Police Chiefs Association in 2016/2017, the third largest organization of its kind in the country. In 2018, he was honored by FPCA as Florida’s Outstanding Chief Executive of the Year. Chief Arenal has served FPCA chairing numerous committees, and he served a number of years on the FPCA’s Executive Board. He has represented the FPCA on Chief delegations for several Florida Governors. In 2018, he participated in a delegation conferring with Governor Rick Scott regarding school safety in the aftermath of the MSD school shootings. In March 2019, he served as a member of Governor Ron Desantis’ FDLE Unified Threat Assessment Strategy Executive Steering Committee, developing a roadmap for Florida in establishing behavioral threat assessment management teams across the state. Chief Arenal has also served as an instructor for FPCA over the past decade, teaching annually at both the FPCA New Chief and Future Chief Seminars. He has also represented FPCA as an instructor for a number of external organizations, to include the Mississippi Association of Chiefs of Police, the Minnesota Chiefs of Police Association, the Florida City and County Management Association, and the Florida League of Cities.

Chief Arenal and his wife Barbara currently live in Parkland, Florida where he serves in his most important capacity; husband and father to their 16-year-old son, Connor.