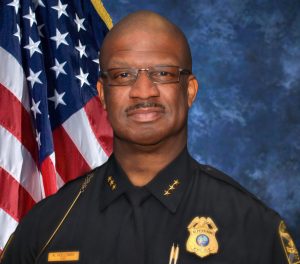 Chief Holloway earned his Bachelor of Arts degree (Business Management) in 1999 and Master’s degree (Business Administration) in 2001. He is a June 2005 graduate of the course of study in Executive Strategic Management, Police Executive Research Forum, Senior Management Institute for Police at Boston University. In June of 2011, he was awarded a Certificate of Completion for the Senior Executives in State and Local Government Program from Harvard University, Kennedy School of Government, Executive Education. In August of 2015, he successfully completed the Executive Leaders Program at the Naval Postgraduate School’s Center for Homeland Defense and Security, Monterey, California; and in September of 2016, he successfully completed the Federal Bureau of Investigation’s National Executive Institute (Class #39).

Chief Holloway has taught law enforcement to national and international governmental, military, educational, and community organizations. He is currently 3rd Vice President of the Florida Police Chief’s Association (FPCA) and serves as Chair of the FPCA’s Subcommittee on Accountability and Societal Change. He is also Chair of the Law Enforcement Committee on Criminal Justice Section of the American Bar Association, Chair of the Florida Regional Community Policing Institute and Chair of the Juvenile Justice Advisory Council. Chief Holloway currently serves on the Florida Supreme Court Standing Committee on Fairness and Diversity and the Florida Supreme Court Racial and Ethnic Disparities Advisory Workgroup. He is a trustee emeritus with Gulf Coast Jewish Family and Community Services. In May of 2018, Chief Holloway was named a Distinguished Fellow at the Joint Special Operations University (JSOU) at MacDill Air Force Base for his contributions to a branch of learning associated with national security and special operations.

Chief Holloway is married to Andra Todd Dreyfus of Clearwater, an attorney.